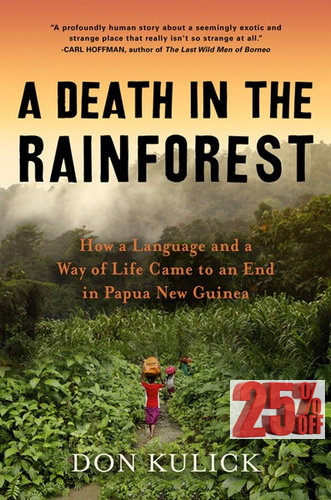 A Death In the Rainforest

A Death in the Rainforest

As a young anthropologist, Don Kulick went to the tiny village of Gapun in New Guinea to document the death of the native language, Tayap. He arrived knowing that you can’t study a language without understanding the daily lives of the people who speak it: how they talk to their children, how they argue, how they gossip, how they joke. Over the course of thirty years, he returned again and again to document Tayap before it disappeared entirely, and he found himself inexorably drawn into their world, and implicated in their destiny.

Kulick wanted to tell the story of Gapuners—one that went beyond the particulars and uses of their language—that took full stock of their vanishing culture. This book takes us inside the village as he came to know it, revealing what it is like to live in a difficult-to-get-to village of two hundred people, carved out like a cleft in the middle of a tropical rainforest. But A Death in the Rainforest is also an illuminating look at the impact of white society on the farthest reaches of the globe—and the story of why this anthropologist realized finally that he had to give up his study of this language and this village.

An engaging, deeply perceptive, and brilliant interrogation of what it means to study a culture, A Death in the Rainforest takes readers into a world that endures in the face of massive changes, one that is on the verge of disappearing forever.

Don Kulick is the author or editor of more than a dozen books on topics that range from the lives of transgender sex workers to the anthropology of fat. He has conducted extensive anthropological fieldwork in Papua New Guinea, Brazil, and Scandinavia. He is the recipient of numerous grants and honors, including an NEH Fellowship, an A. W. Mellon Foundation Guest Professorship, and a Guggenheim Fellowship. He is currently Distinguished University Professor of Anthropology at Uppsala University in Sweden, where he directs the research program Engaging Vulnerability.

"Perhaps the finest and most profound account of ethnographic fieldwork and discovery that has ever entered the anthropological literature." --The Wall Street Journal "If you want to experience a profoundly different culture without the exhausting travel (to say nothing of the cost), this is an excellent choice." --The Washington Post

"What does it take to study a culture? Anthropologist Don Kulick visited the small village of Gapun in New Guinea on and off for 30 years to study its dying language, Tayap. Blending academic discourse, linguistics and his personal stories about life in the remote community, A Death in the Rainforest illuminates the ways a society can change over time and become swallowed by forces of the outside world." --Time

"An important history lesson from an anthropologist who spent three decades watching a language and a people go extinct as the rainforest around them disappeared."--The Revelator

"Anthropologist Kulick tells a story of cultural and linguistic transformation and exchange in this clever, empathetic memoir of his time spent in Gapun, a remote village in Papua New Guinea . . . Despite lots of fascinating detail about a culture that appears very different from the modern West, the book concludes with a firm and moving reminder about shared similarities and an exhortation to better honor collective responsibilities. This frank, passionate work will move readers interested in a thoughtful contemplation of culture and globalization." --Publishers Weekly

"In this captivating narrative, [Kulick] considers complex questions about race and power in anthropological research, the nature of relationships among very different people, and the challenges of living in such a demanding environment. Kulick's engrossing, thought-provoking, and transporting chronicle will be enjoyed by National Geographic fans and all readers interested in cultural investigations." --Booklist

"[Don Kulick's] stories of adjusting to daily life in the village are both humorous and compassionate. Throughout his time working in Gapun, he is distinctly aware of the field of anthropology's conflicting eras of practice, from its colonialist past up to the highly culturally sensitive present. Kulick allows his research to reveal his own cultural bias and acknowledge his privilege; in doing so, he details the reasons that support his theory as to why languages die in a manner that shows strong social responsibility and fairness. Recommended for a readership of varying ages, from young adults with an interest in cultural anthropology to college students and academics." --Library Journal

"A book not to be missed . . . Don Kulick looks back at thirty years of research into the death of Tayap, the native language in Gapun, a remote village in Papua New Guinea. His honest account of his work and adventures in this village are no less than fascinating . . . His funny, warm, and at times sad account of the changing way of life in Gapun makes for an informative and unforgettable read, and one that I wholeheartedly enjoyed."

More Information
Reviews
Write Your Own Review
Only registered users can write reviews. Please Sign in or create an account
Product Questions
Customer Questions
No Questions
Please, mind that only logged in users can submit questions