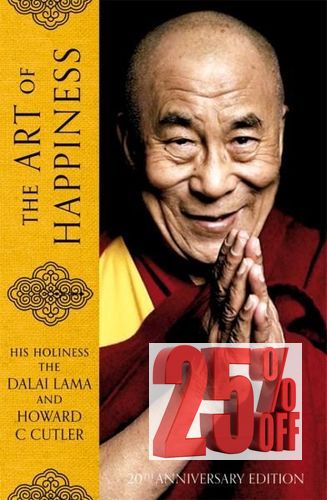 The Art of Happiness

The Art of Happiness

The 20th anniversary edition of the beloved guide to happiness from one of the world's great spiritual leaders.

The Art of Happiness: A Handbook for Living is a practical, inspirational guide that combines the wisdom of the Dalai Lama's eastern spiritual tradition with human happiness expert Dr Howard C. Cutler's western perspective.

From health, self-esteem, family and relationships to anger, stress, anxiety and jealousy, they apply the principles of Tibetan Buddhism to everyday problems and reveal how we can find balance and achieve lasting happiness in our lives.

Mental wellbeing and the power of positive psychology have never been so important, and, more than ever, people are turning to the world's great spiritual leaders in their search for meaning. The Art of Happiness is a landmark book that will continue to uplift spirits around the world for decades to come.

His Holiness the 14th Dalai Lama, Tenzin Gyatso, is the exiled leader of the Tibetan people. He was born on 6 July 1935, to a farming family, in a small hamlet located in Taktser, Amdo, northeastern Tibet. At the age of two the child, who was named Lhamo Dhondup at that time was recognized as the reincarnation of the 13th Dalai Lama, Thubten Gyatso. The Dalai Lamas are believed to be manifestations of Avalokiteshvara or Chenrezig, the Bodhisattva of Compassion and patron saint of Tibet.

Bodhisattvas are enlightened beings who have postponed their own nirvana and chosen to take rebirth in order to serve humanity. In 1989 he was awarded the Nobel Peace Prize for his non-violent struggle for the liberation of Tibet. He has consistently advocated policies of non-violence, even in the face of extreme aggression. He also became the first Nobel Laureate to be recognized for his concern for global environmental problems.

Since 1959 His Holiness has received over 84 awards, honorary doctorates, prizes, etc., in recognition of his message of peace, non-violence, inter-religious understanding, universal responsibility and compassion. His Holiness has also authored more than 72 books.

a powerful element of integrity and sincerity - NY Times